A year ago today

A month ago I was looking forward to the start of a new year because it meant I could - symbolically at least - start over fresh and hope for a better year than 2019. And it's a very low bar to be better than 2019. Only requirement is my family has to stay alive.

So 2020 should be better (I hope!), but as I'm discovering it's still going to be very painful. Because it's going to be pretty much a whole year of "A year ago today..."

A year ago today my dad had brain surgery. And came out of it unscathed, and with his sense of humor intact - he spent the following weeks talking about the hole in his head and showing off his Frankstein-look with a scary long line of staples along the side of his head! 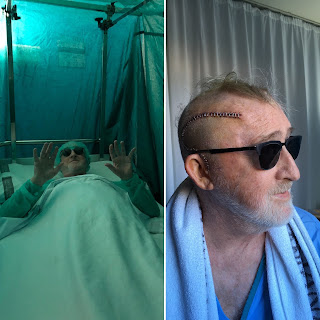 A year ago on January 9th my dad went in for a brain scan (MRI) at a private clinic (looking into the cause of some symptoms that appeared the previous summer and got progressively worse over the fall), and the next day at doctor friend at that clinic called him and said "go straight to your the ER at your local hospital and have them admit you and get you to see a neurologist". The scan showed something in the brain that shouldn't be there, and the radiologist's expert opinion was tumor. But more studies would be needed to confirm what type exactly (although it was apparently quite clear).

A year ago on January 11th my dad was admitted to hospital and spent several weeks having tests done while neurologists, neurosurgeons and oncologists put together an attack plan. For starters relatively positive: it was in an easy place to access, minor risks for secondary effects, there was a chance it was benign...

A year ago tomorrow (or some day next week, the exact moment the initial suspicion was confirmed is lost in the fog of my mind) the neurosurgeon told us the tumor's name: glioblastoma multiforme, grade 4. Supposedly about as bad as it gets. Composed of various cell types that don't all respond to chemo in the same way. Super-fast growth. Spreads to other parts of the brain no problem... Average survival rate (or until a 2nd tumor appears, which is not always possible to remove through surgery): 2 years if it responds well to chemo/radiotherapy (with the occasional 5 year miracle case). If it doesn't? Less.

9 months later. It was over. The bastard was resistant to the chemo & radio, a scan in July showed new growth in the incision site and two new tumors in the other side of the brain. A strange crisis / tremor / spasm (to this date we still don't know how to describe it) had him back in hospital on July 29th. Home a few days later but unable to walk much without support because apparently one of the new tumors was affecting the right side of his body (hand, leg) and he needed a walker. Then a wheelchair, then no more leaving the house, then no more leaving the bed... And then 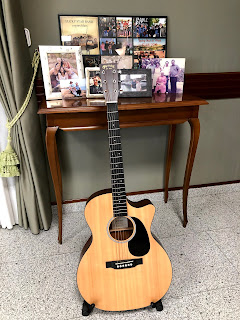 On October 23rd we'll be saying a year ago today he left us. On October 24th we said goodbye.

Will our hearts still be broken in October 2020? Oh god I hope not! But it's been 3 months and I feel worse instead of even marginally better.

Maybe one day I'll share about how wonderful everyone was last year. How much love was in our life, pouring in from around the world. But not today. Today I'm just pissed. Because a year ago today I had hope. And a year ago tomorrow I didn't.


CANCER SUCKS
Posted by CrazyCris at 20:18

Email ThisBlogThis!Share to TwitterShare to FacebookShare to Pinterest
Labels: family, getting to know me, health, heartbreak