Welcome to our OCEANIC BLOG-A-THON! 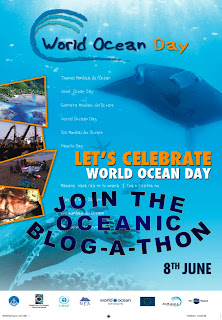 In honour of World Oceans Day we thought we'd all get together and share our thoughts, memories, adventures, photos, knowledge, passion for the seas and oceans to help raise awareness on the importance of the Seas and Oceans. After all, our planet may be called Earth, but there must be some reason it's known as "the BLUE planet"!

Life exists on this planet thanks to two things: an atmosphere and water! 3/4 of the Earth's surface is covered by seas and oceans. They provide food, natural resources, inspiration... They've impulsed commerce and exchanges between societies since the Phoenicians and Greeks set sail across the Mediterranean (and even earlier in some parts of the world). The world's oceans are all inter-connected, a reminder of how we're all part of the same larger ecosystem... and what happens in one region will inevitably affect others at some point.

And now, without further ado, we dive into the wonderful world of blogging to find out how people from different places, with different lives, view the seas and oceans and share their experiences:


So go, take some time and discover what all these people have to share with us. Leave them your comments so they'll know what you thought. And remember to "Wear Blue and Tell Two"!

Be sure to return throughout the day for updates! Links will be posted a.s.a.p.!
Posted by CrazyCris at 00:05