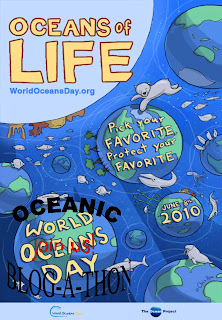 Welcome back for our second Oceanic Blog-A-Thon! With 3/4 of the planet Earth covered by these interconnected seas and oceans... I've always wondered who chose Earth as our name? Ocean would be much more appropriate! Must be due to the bias of some long-lost land-lubber...
To celebrate World Oceans Day we (a random group of bloggers who care about our oceans) have decided to take a moment and reflect upon the importance of the oceans, for us personally, for our planet, for our future, for our past. We're sharing information, memories, feelings, wishes... about the Oceans with our readers. 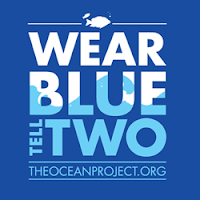 With the current on-going oily catastrophe in the Gulf of Mexico there has never been a more pertinent time to stop and think and act. What can we do for our Oceans? Reduce our waste? Volunteer in coastal clean-up projects? Be more careful of the seafood we buy to consume for ourselves by finding out if it comes from sustainable fisheries? At the very least we can "Wear Blue and Tell Two!" as Ocean Project suggests. So on June 8th, WOD, I suggest you deck yourself from head to toe in the colour blue and share at least two facts about this wonderful environment or the critters who inhabit it to those around you. Need help with the kind of information you can share with people? I'm afraid I haven't had time this year to write a whole post of oceanic factoids, but last year's are still valid so check them out! Ocean Project also has some good ideas on their website (click on the Wear Blue link above) such as the impact of global warming on loss of diversity in coral reefs or links to sustainable seafood guides.
Aha! Thanks to two of our participants I just thought of another factoid I could share with you: the oceans' largest animals eat some of the smallest! The blue whale (Balaenoptera musculus) and the whale shark (Rhincodon typus) are the largest mammal and fish in our oceans, measuring up to 33m (108ft) and 12.6m (41.5ft) respectively, and they both survive on a steady diet of krill or similar zooplankters... shrimp-like animals that are so small (a few centimetres) we need a magnifying glass to see them in all their detail!
Read on for more fascinating, inspiring, educational oceanic tales brought to you from Bloggers around the Globe!
Be sure to return throughout the day for updates (new entries)! There is still plenty of time to participate, instructions can be found here. Links will be posted a.s.a.p. (in other words as soon as I see them and read the posts)! And remember to Wear Blue and Tell Two! ;o)
Posted by CrazyCris at 00:50